You are here: Home / Archives for Adobe / Fireworks 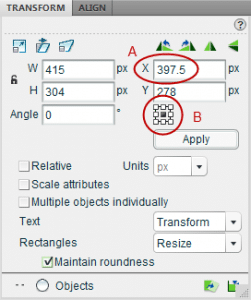 Here are a few of my essential Adobe Fireworks’ extensions. As much as I love Fireworks and work with it almost everyday, I find that its native creative toolset still has some gaping holes when compared to other vector based design application like Illustrator for example. On the other hand, Fireworks has a very dedicated and inventive user community and several of its members have create extensions to patch those holes or simply improve Fireworks’ workflow.

END_OF_DOCUMENT_TOKEN_TO_BE_REPLACED

Unless you’ve been hiding under a rock, or you are not a Web designer or working in a related field, you cannot have missed the announcement of Adobe’s new Creative Suite 5 a few weeks ago. I have been using two products in the suite for a while now, including of course, Fireworks CS5. As is becoming a tradition here on pixelyzed.com, here are my thoughts on the new version as well as a few thoughts on the future…

END_OF_DOCUMENT_TOKEN_TO_BE_REPLACED

I could not imagine my creative process without Adobe Fireworks. I have been using that application since version 2.0 sometime in 1999. 10 years ago, Fireworks was not an obvious choice but the workflow advantages over Photoshop were immediately evident to me and my creative process never was the same. Unfortunately, it took almost all those years for Fireworks to be taken seriously in the industry. Being a Fireworks evangelist 5 or 6 years ago felt like preaching in the desert. But not anymore.

Today, Fireworks is finally thriving. After a couple false starts and dud versions (yes I’m looking at you Fireworks 8 and CS2!), versions CS3 and CS4 have finally brought Fireworks to a level where many industry heavyweights are now paying attention. It is also crossing over into new fields like User Experience and Interaction Design where many practitioners who are not traditional Web designers (read visual/graphic designers) use Fireworks for rapid prototyping and quickly iterating interface and interaction designs.

It is an exciting time for Fireworks which proves that Adobe’s decision to keep it alive after acquiring Macromedia was the right one. Not only that but the application itself has finally started to really improve again after stagnating for a few years under Macromedia’s watch. There are new books being written about it or with chapters about it, new (and not so new) Web sites covering how to use it or who is using it. Can’t wait to see what’s in store in Fireworks’ future.

If you have never tried it, do yourself a favor and do so. If you are coming from Photoshop, leave your pixel pushing Photoshop mindset at the door and embrace Fireworks vector based workflow. Regardless of Fireworks’ very capable bitmap editing tools, its real strength lies in its hybrid workflow based on a vector based core. Until you really give it a try, you will never know how much difference working in a vector based environment does for any kind of layout work.

Dan Harrelson from Adaptive Path has written a very interesting blog post titled Rapid Prototyping Tools and what makes good prototypes. My long time favorite Adobe Fireworks is mentionned along with Axure RP Pro (which is a newer tool in my arsenal) but also several others including online tools like Balsamiq Mockups.

What is most interesting to me in the post is the first part before he lists the tools and where he explains the principles of good prototyping and why it should be done in the first place. For me, this comes following a very well received presentaion at the IA Summint 2009 from Fred Beecher titled Integrating Effective Prototyping Into Your Design Process and which I followed through live tweeting as I couldn’t attend.

Both Harrelson and Beecher press the important point that creating interactive prototypes helps us design better user experiences as they help validate a design direction early in the process before investing a lot of money and effort into design or development solutions that may not yield the best results possible.

I strongly suggest you take a look at Dan Harrelson’s blog post and go through Fred’s presentation slides. They may put you on a track to improve your own process and deliver better solutions to your clients.

Although the new version of Fireworks has been in public beta for a while now, I haven’t talked much about it here yet. Not because it’s not an exciting release, quite the opposite, but only because until a month ago I was basically working 2 full time jobs and since I turned a full time freelancer, I’ve worked hard at setting up my new business, re-branding its image and getting into my freelance groove. I’ll talk about all that later but I’m just saying that I just did not have the time to write anything meaningful about Fireworks CS4. This post is just a start.

Anyone who’s read this blog before or had to “endure” some of my long winded tirades about Fireworks’s development and direction in the last few years knows that I just haven’t been happy at all about a lot of what happened and a lot of the decisions that have been made during the development of the last 3 versions. On one hand, I have been a long time evangelist of the product but, on the other hand, one of its harshest critics as well. That’s because I care about it… a lot. Fireworks is one of the reasons I was able to build a nice Web design business for myself on the side while working a full time job in the printing industry. It enabled me to work faster and get ideas into concrete form easier than with any other graphic application I’ve used before or since. So it has long been a key part of my tool-set and now that I do this full time, it’s becoming even more important to me.

But there is a lot to be happy about in the new CS4 version. It still misses some long requested features but it has finally started moving in the right direction again and actually made a huge leap forward.

It’s been a very long time since I’ve been this excited about a new Fireworks release but this one really is a fantastic and worthwhile upgrade. Beyond the UI changes, most of the new features go to work flow efficiency and ease of use which have been Fireworks’ main strengths from the beginning. With this release, it’s really starting to shape up like the creative powerhouse application it was always promised to become. I can’t wait to see how much further Fireworks will jump with the CS5 version…