You are here: Home / Archives for theme frameworks 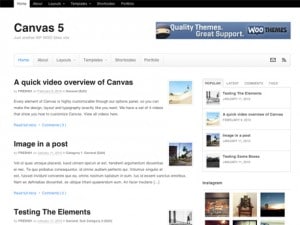 This review of WooThemes Canvas is my first theme review after writing my 4 Basic Criteria to Evaluate a Theme Framework post a while ago. I chose to start with Canvas because it’s a theme I’ve used often in the last 2 years and it’s been receiving a few major updates recently. As one of my 4 criteria is stability through upgrades, I can speak to that with more experience with the theme now.

END_OF_DOCUMENT_TOKEN_TO_BE_REPLACED

I will soon be writing reviews for some of the main WordPress plugins and theme frameworks that I use in my client projects. But before I do that, I wanted to write a post explaining the basic criteria I use to evaluate a theme because they are not necessarily the same you’ll read about in most other reviews out there that focus on workflow features alone. I’ve read many theme framework reviews in the last 3 years and I found most of them to be lacking in substance. That’s not because they were bad reviews or because the people writing them were doing a bad job, they were just aimed at a specific kind of user (non-coders, beginners or casual users) and limited themselves to what I consider “surface” criteria that become far less relevant when you build Web sites with WordPress for a living. When your business and reputation depend on the quality of the themes and other products you install on client sites, “features” like drag and drop and especially “no coding required” quickly take a second or third seat to more important matters like performance, stability and flexibility.

So here I’ll explain 4 of the basic criteria I use to evaluate a theme framework’s suitability for inclusion in my workflow to be used on specific projects. I’m concentrating on issues I rarely if ever see mentioned in theme reviews so I won’t talk about things like ease of use or flexibility of any workflow related features here. Those things will be included in my specific theme framework reviews. I hope this article will help you make more informed decisions if you are looking for a theme framework to use on a client site and are not sure which one would be the best fit for your workflow and your client’s needs.

END_OF_DOCUMENT_TOKEN_TO_BE_REPLACED

Note: I’m leaving this article up for “historical” purposes but, please note that I no longer recommend Headway. I’ve had far too many problems with it after I published this post. Try it if its feature set appeals to you but I no longer stand behind it.

Many of you know that, since I’ve started working with WordPress, the only theme I’ve used on any client project is Headway. Headway is not “just” a theme like the multitude of premade themes (free or paid) you can download and slap on a site with a few tweaks. Headway is a theme framework. It enables me to integrate any design I create or is given to me into a site. It affords me total flexibility as well as reliable tools I can count on project after project. To me, it’s not just a WordPress theme or a framework but a complete Web Site Design and Development System.

END_OF_DOCUMENT_TOKEN_TO_BE_REPLACED

I read a very interesting article over the weekend titled “Are WordPress Themes Cheating in Web Design?” by James Dalman. That article itself was inspired by an older one titled “Confessions of a Template Whore” by Sabrina Dent which is equally interesting.

The point of this post is not to rehash the same ideas as these two articles. I agree with both authors that, using pre-designed themes is quite OK in many cases, especially for non-designers who want to get blogs and even simple sites up quickly and cheaply and still get at least a professional “look”, even if we all know that design goes a lot deeper than mere decoration and surface skinning.

A good looking and functional free theme like the one I used when I moved this site to WordPress won’t win anyone any originality awards, but it will get the job done for a lot of people and won’t turn away visitors because the site looks like crap or is completely unusable.

But beyond pre-made themes that you just plug into a site and tweak a little, there is whole other category of themes called “Premium Themes” or theme frameworks. This site’s evolving design is now based on one called Thesis and I’ll be redoing my company blog as well as Isabelle’s entire Web site using another called Headway. I talked about Thesis and theme frameworks in this recent post.

Basically, what theme frameworks do is enable you to easily (or relatively easily)  “skin” your blog or site using your own design with little or no coding… and that is what I wanted to touch on here.

For me, starting to use WordPress has been a mind shift in itself, for a few reasons. But I always figured I would at least eventually build my own theme for it… from scratch… and I figured I would build blogs with it and little else. But that’s until I discovered the true power of the platform. The mind shift was complete once I discovered Thesis and Headway and the world of theme frameworks… and my imagination started racing!

As many of you know, I have been designing and building Web sites for a long time now, so I know how to code and do so in an efficient manner. I’ve never used code exported from Fireworks (the application I design all of my sites with) because it never was good enough for me. Without calling myself a purist, I’ve always taken pride in the quality of my HTML and CSS and I’ve worked hard at keeping up with current techniques. So you can imagine my reluctance to let go of most of my control using WordPress and a theme framework to build not only a blog, but entire Web sites!

But I plan to do just that for not only Isabelle’s site, but my biggest Web site project to date if I get it (I’m sending my bid in on Friday) as well as any suitable future projects.

What changed my mind? Quite frankly, I’m tired of the tedium and repetition. Using WordPress and a good theme framework means that a lot of a site’s infrastructure is already done for me, and done solidly too. Like James Dalman said in his article:

These are just as applicable to coding a site as they are to designing it. If I can get more projects done faster it will mean a better cash flow for me and significant savings for my clients. Plus it will mean I will concentrate more on the parts I enjoy (strategy, design, UX) and less on the tedium of coding the same kind of functionality again and again.

This is not for every project but when it is applicable, it will be a win-win for everyone IMO.

What do you think?

Update – November 16th, 2012:
Just a short not to say that, since I published this post, I’ve changed my mind and stopped recommending Thesis. I would actually recommend staying away from it for several reasons I may touch upon in a future post. I also have big reservations about Headway now based on several incidents I had with it like minor updates breaking sites in the 3.x version and 2.x sites breaking completely for no reason I could find. I personally have lost my trust in Headway but still think the product is good for many people as it’s a very flexible framework and my experience is probably not typical. But these days I stick with either iThemes Builder mostly or WooThemes Canvas for some projects (including this site) because I believe they are better engineered and stick to WordPress standards better and I outlined some of the reasons I think this is very important here. I have more sites on Builder than Headway now and no updates have ever broken a layout and none of my Builder sites have ever lost their formatting for no reason overnight like what happened on my business site which was on Headway 2.0.13 until recently when I put it on Canvas.

Update – November 11th, 2013:
Just an additional note that, as of yesterday, this site now runs on the Genesis Framework which is becoming my primary WordPress theme framework. Some of the reasons are outlined in the post for the launch of v5.0 of this site but I will publish a complete review in the near future. I will also continue to use iThemes Builder and WooThemes Canvas on existing and probably future client projects as I still believe in both the products and the companies behind theme but, at this time, I feel that Genesis meets my needs better as it outputs the cleanest, most efficient HTML and CSS code of any WordPress theme framework I’ve used so far.

As I already explained previously, on April 5th (2010), I migrated pixelyzed.com from another blogging platform to WordPress. Last night I changed from the free theme I’d been using to my own new design which I integrated into WordPress using the Thesis theme (more about Thesis below).